October 25, 2011 by Melanie Newman
Published in: Uncategorized
Tweet
Email this 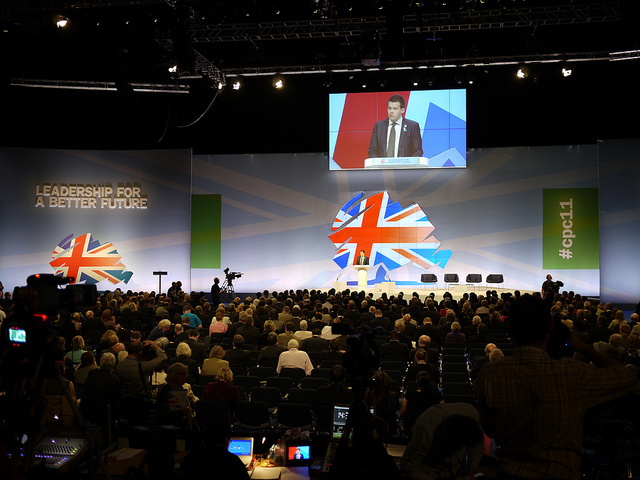 It’s all about lobbying: as PR representatives out-number party members at conferences.

Party conferences have become so packed with lobbyists that signed-up party members feel they are out-numbered. And yet the many meetings that ministers have with leading business chiefs and top spin doctors are not declared.

But the many lobbyists’ dinners laid on for ministers at party conferences are counted as private political engagements and so do not come under the new rules, unless they are the very senior level media meetings which the prime minister has already committed to making public.

Tamasin Cave of Spinwatch, which campaigns for lobbying transparency, added: ‘It’s utter nonsense to suggest that lobbying companies are targeting ministers because of their party political affiliations.  It is just a ruse to make these lobbying meetings secret.’

John Mann, Labour MP for Bassetlaw, who has campaigned to clean up politics, added the party conferences are being ‘systematically used to undermine the principle of transparency’ by lobbyists.

Related article: How rules allow ministers to keep meetings with lobbyists under wraps.

Lobbying organisations usually attend all three party conferences, but pay particular attention to the conference of the party in government.

Briefing ministers
While government department staff class the meetings as party politics, it is clear from comments made by some of the businesses and lobbyists holding the events that they see them as an important way of influencing government policy.

At last year’s Tory Party conference, the Engineering Employers Federation, a manufacturers’ organisation, and Jaguar Land Rover hosted a ‘private’ dinner for business and enterprise minister Mark Prisk , with ‘senior company representatives from across EEF’s membership’. A briefing on the EEF website stated that: ‘the minister was keen to hear feedback on his department’s forthcoming manufacturing framework, while companies were keen to impress on him the need for policy to be pulling in the same direction in support of our sector.’

Steve Radley, EEF’s director of policy, said: ‘These events are part of the normal representation process … the intention is to give minsters a chance to meet a cross section of business, understand how business operates on a daily basis, the competitive pressures they are facing and the impact that government policy has on the economic environment in which they operate.’

A BIS spokesman, however, confirmed: ‘It was not official ministerial business so there would be no requirement for this to be on the register of hospitality received as a BIS minister.’

Another organisation, the British Insurance Brokers Association (BIBA) also wrote about how its ‘corporate day’ during the 2010 Tory Conference was used to focus on a key minister.

‘BIBA’s main objective at conference was to target Mark Hoban MP, financial secretary to the Treasury, who is the main architect for the Financial Services Authority’s replacement,’ says the BIBA blog. ‘Hoban has influence over the reform of the Financial Services Compensation Scheme … Our mission was to ensure that Hoban understood our position so that any future decisions he makes affecting brokers would be as informed as possible.’

The website goes on to describe how the BIBA representatives ‘were able to have some quality time’ with the minister at an informal meeting as well as at a scheduled round-table. Under ministerial rules, neither meeting needed to be declared by the minister.

A BIBA spokeswoman said: ‘This event was arranged by the Conservative Party. Organisations were invited to put their views to ministers.  As a not-for-profit trade association, BIBA works hard to present its members’ views to government.’

Harassing MPs
The number of meetings between ministers and lobbyists at the Conservative Party conference earlier this month was as great as ever. Party activists complained that lobbying was supplanting political debate. Tory blogger Iain Dale wrote: ‘If you’re a politician there’s very little for you to do other than be harassed by overzealous public affairs companies all wanting to buy you dinner in the hope you’ll agree with their uber-obscure legislative proposal.’

Public affairs consultant Lionel Zetter was recently quoted describing the Party conference season as ‘lobbying nirvana’, while Peter Bingle, chairman of lobbying firm Bell Pottinger Public Affairs, blogged earlier this month that he likes conference dinners and lunches at which ‘twelve or so clients can sit down and discuss their issues with a minister, special adviser or politician.’ He added: ‘On the basis of the last few weeks politicians seem to like this approach as well.’

Industry lobbying groups such as the Glass and Glazing Federation and the Association of Business Insurers reported private meetings with ministers this year. ‘Highlighting the economic contribution of insurers was a key theme as I attended the three main party conferences,’ wrote ABI director-general Otto Thoresen.

And business leaders paid up to £1,000 per-head at this year’s Conservative Party conference to attend a fundraising dinner with ministers, including Chancellor George Osborne.  The Conservative Party has refused to reveal the names of those who attended the dinner.

The register of ministerial meetings covering the party conferences this year has not yet been published, but none of the meetings are expected to be declared.

A consultation on a compulsory register of lobbyists and their clients, which has been resisted by the lobbying industry, is due to be launched within six weeks. However, legislation is not likely to be tabled in Parliament before 2013.