September 22, 2011 by The Bureau
Published in: Uncategorized
Tweet
Email this 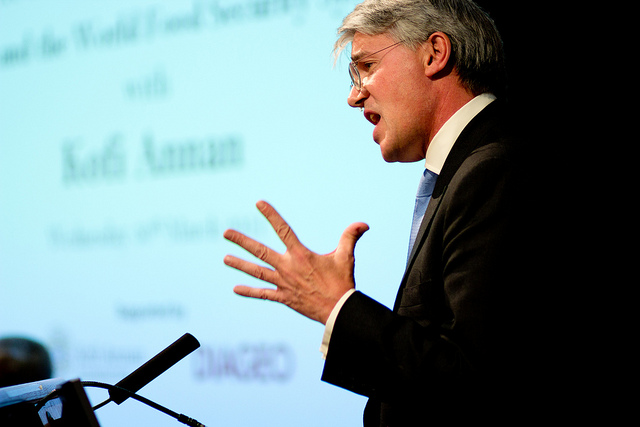 Andrew Mitchell in full flow.  But what is he really saying?

This is the transcript of the interview of British Secretary of State for Development Aid, Andrew Mitchell by Jeremy Paxman on the  BBC’s Newsnight programme on Wednesday 21 September, 2011.

‘We had that investigated by officials in some detail about six or seven months ago and they found no evidence at all of systemic misuse of food support.’
Andrew Mitchell, Secretary of State for International Development

Q. Just to be clear about that particular allegation which you say was investigated – did your investigators go to Ethiopia – to the places in question?
Yes the, the – my investigators are the officials who are based in Ethiopia and run the British development programme there. And they investigated these allegations – and as I say they discovered that there was no systemic misuse of food support.

Q. When you look at the assessments of the human rights record of the government of Ethiopia – the hanging of civilians, torture, mass rape, arbitrary imprisonment and the rest – one wonders why even one pound of British taxpayers money is being funnelled through them let alone £290 million pounds of it?
Well let us be clear. These allegations need to be investigated and the British government will press for them to be so, in an open and independent way. That is entirely separate from the issue of British development support – British aid going to Ethiopia – none of which goes through the government. And we should be clear that British development over recent years has made a huge difference in Ethiopia, saving literally millions of lives and you can see this now by looking at the way in which the desperate situation in the horn of Africa is affecting Somalia, where probably 400,000 children are at risk of dying later this year. Compare that to what has happened in Ethiopia where the international development effort has been hugely successful and we’ve probably cut the prevalence of malnutrition amongst children in the last 20 years by nearly 50 per cent. So British aid works.

Q. Can I just clarify one point of fact here – you say development aid does not go through the government of Ethiopia – you’re absolutely certain about that are you?
Well there is no general budget support through the government of Ethiopia – that was stopped in 2005 after the election of Prime Minister Meles on that occasion. We have a very extensive social protection programme, which is administered by an independent government organisation which we monitor extremely closely and which gives protection and support to some 7.5million people in Ethiopia. Now that programme uses aspects of local government, but it does not go through the central government in Addis and it relies on regional implementation to deliver it. I’ve seen or myself, I’ve followed the way that programme works and I’ve seen how effective it is in saving lives.

‘… my investigators are the officials who are based in Ethiopia and run the British development programme there. And they investigated these allegations.’
Andrew Mitchell, Secretary of State for International Development

Q. Sure, but the accusation is that that aid itself is being manipulated for political ends?
Well the accusation is that food aid – which is a very small part of it – is being manipulated. And as I say British officials investigated that on the ground, and found that, you know we can’t be certain that it never happens, but we found no evidence of the systemic manipulation of food aid.

Q. And do you also believe that this government won 99.6 per cent of the vote in the elections of 2005?
Well the independent analysis of the election was that it wasn’t perfect but it was in African terms quite good and better than the previous election.

Q. How is it then that given your confidence in the legitimacy of the government there, that the Americans have come to such very different conclusions about the sort of regime that it is?
Well these are leaks through Wikileaks, they are quite dated – but I emphasise that all these allegations should be investigated independently, and we always press when these allegations are made, and they are allegations, that they should be properly investigated.

Q. These allegations aren’t very dated, they date from 2009?
I think they refer to events that took place 2008, 2009, two years ago, since when we’ve made very strong representations and the investigations of my officials into the distortion of food aid were some six or seven months ago.

Jeremy Paxman: Well after we recorded that interview the Department for International Development clarified that no department official actually been into the field to specifically investigate allegations of misuse of aid, there investigation was they say a desk based study conducted from Addis Ababa which did not seek to prove or disprove allegations of distortion.

To watch the Newsnight interview with Andrew Mitchell, click here.