September 21, 2011 by The Bureau
Published in: Uncategorized
Tweet
Email this 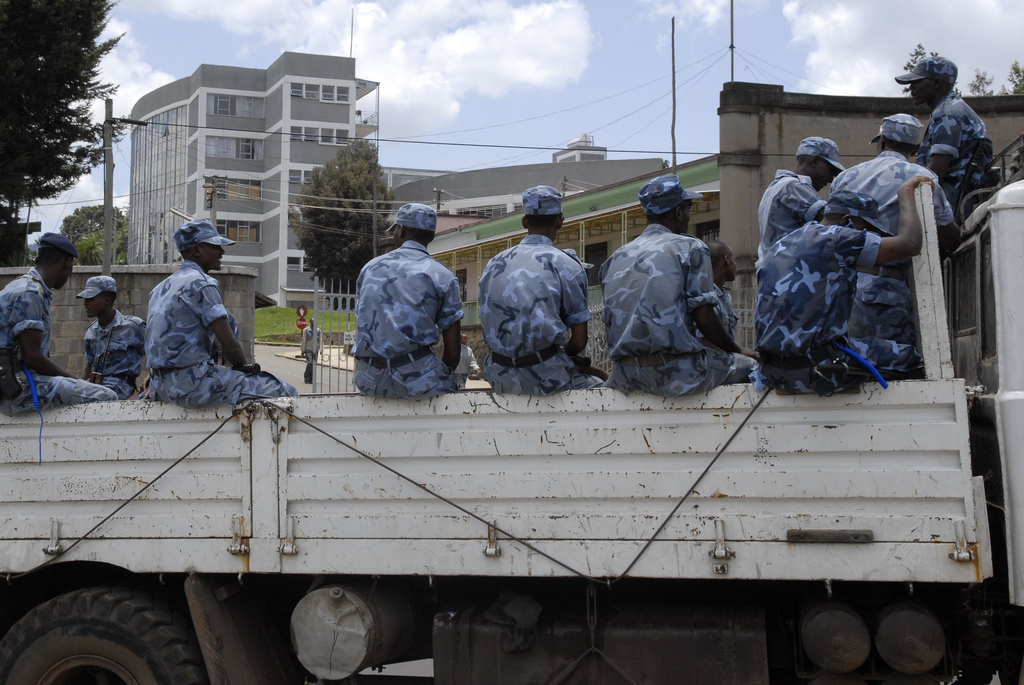 The Ethiopian government has turned its back on human rights concerns.

Evidence has emerged that the Ethiopian government has launched a renewed crackdown on opposition members, less than two months after a joint investigation by the Bureau and Newsnight revealed allegations of torture, repression and the political manipulation of foreign aid.

Our report was strongly denied by representatives of President Meles Zenawi.

But now the Bureau has gathered evidence of further repression and it appears many of those being targeted are the people believed to have cooperated with our investigation.

According to members of the Ethiopian community in the UK many people have been arrested, some have been questioned by security forces while others have fled the country in fear.

‘There’s really increased tension now amongst the political opposition. Civil society activists have said the situation is rapidly deteriorating Journalists are more afraid even than they were before, and we are even talking about a significant climate of fear.’
Claire Beston, Amnesty International

Further evidence
On the night of broadcast Assistant Ambassador to the UK, Abdirashid Dulane, told the Newsnight programme: ‘This is completely a report actually that lacks objectivity and also lacks evenhandedness.

‘The sources that it used are opponents of Ethiopia who have been rejected by the electorate and who have been time and again, have already shown that their allegations are unfounded.’

The Embassy in London followed up these comments with an official statement, accusing the BBC of being unbalanced, and roundly rejecting the allegations made.

Yet just a few weeks later, at the end of August, a delegation from Amnesty was expelled from Ethiopia. They had been in the country for 12 days before their arrest, during which time Amnesty says they were under ‘constant surveillance’.

Ethiopian Aid Exposed
The joint investigation by Newsnight and the Bureau uncovered evidence of:

Two opposition leaders, Bekele Gerba and Olbana Lelisa, were arrested on the same day. Bekele Gerba, deputy Chairman of the opposition Oromo Federalist Democratic Movement (OFDM) has been accused of belonging to the Oromo Liberation Front (OLF) a charge the government often uses to silence members of the Oromo political opposition. It is as yet unclear what Olbana Lelisa of the Oromo People’s Congress party (OPC) has been charged with.

Arbitrary arrests and expulsions
Reports from our sources suggest that at least 40 opposition politicians and journalists have been arrested by security forces over the last month.

Many are being held in the Central Investigation Centre in Maikelawi where, as we revealed, allegations of torture are rife.

A fortnight ago two Swedish journalists working in the country were charged with terrorism.  Reporter Martin Schibbye and photographer Johan Persson were arrested after crossing from Puntland into Ethiopia’s troubled Ogaden region and covering rebel activity there. They too are believed to be being held in Maikelawi.

US Diplomatic Cable, December 10 2007
… consistent reports of hangings of civilians, branding people, gang rape, arbitrary detentions and killings, forced conscription, and denial of access to food and water resources.  These, combined with consistent reports from elsewhere in the region over the past few months, paint a picture of the horror inflicted on the civilian population as part of Ethiopia’s counter-insurgency against the Ogaden National Liberation Front(ONLF).

The cables show that as recently as November 2009 US government officials had concerns over the politicisation of foreign assistance in Ethiopia. Concerns that closely match those of the NGOs, opposition parties and the international donor community that our investigation highlighted in August.

US Diplomatic Cable, November 22 2009
… government forces continue to withhold food and block legitimate trade from ‘anti-peace’ communities, and continue to engage in mass arrests, rapes, and killings of ONLF supporters.  He reported that the only tactic government forces have ceased to utilize is the burning of villages.

US Diplomatic Cable, November 25 2009
Recent allegations of the politicization of foreign assistance in Ethiopia, including humanitarian food aid, are consistent with reports by non-governmental organizations, opposition political parties, the media, and members of the international donor community.

‘The source that it used are opponents of Ethiopia who have been rejected by the electorate and who have been time and again, have already shown that their allegations are unfounded.’
Abdirashid Dulane, Assistant Ethiopian Ambassador to the UK

Amnesty’s Claire Beston told the Bureau: ‘I’ve heard from political opposition groups that there’s really increased tension now amongst the political opposition. Civil society activists have said the situation is rapidly deteriorating – to use their words. Journalists are more afraid even than they were before, and we are even talking about a significant climate of fear – all those groups are already operating in a climate of fear. ‘

But despite the continuing allegations $3bn of long-term aid flows into Ethiopia every year from international donors. British taxpayers contribute £290m of that amount.

Speaking on the Newsnight programme Andrew Mitchell, the British secretary for international development, said our allegations had been investigated and ‘no evidence of systemic abuse of food aid’ had been found.

When pressed, his department confirmed that although these findings were published up to seven months ago, they were the conclusions of a desk-based study which did not seek to prove or disprove allegations of distortion.

Mitchell added that the allegations would be investigated.

To keep up to date with the latest stories from the Bureau, sign up to our Newsletter here.