August 31, 2011 by The Bureau
Published in: Uncategorized
Tweet
Email this 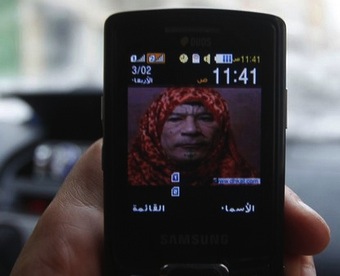 European technology firms helped Colonel Gaddafi spy on Libyans by providing his regime with internet surveillance tools, an investigation by the Wall Street Journal has found.

The newspaper reports from a recently abandoned room in Tripoli in which Gaddafi’s agents spied on emails and chat messages using technology supplied by Amesys, a subset of French technology firm Bull SA.

Surveillance files seen by the paper include emails written in late February – after the popular uprising against Gaddafi’s regime had begun.

One is an email exchange logged on February 26 between two lovers, with the man describing how he is going into hiding because he fears his opposition to the regime has made him a target.

The Wall Street Journal reports that early this year Libyan officials met not only with Amesys, but several other firms including Boeing Co.’s Narus.

The regime had been looking to acquire tools to control Skype, censor YouTube, and prevent Libyans from disguising their online activities, however the civil war ended the talks.

“Narus does not comment on potential business ventures,” a Narus spokeswoman said in a statement. “There have been no sales or deployments of Narus technology in Libya.” A Bull official declined to comment.

According to the paper: “The sale of technology used to intercept communications is generally permissible by law, although manufacturers in some countries, including the U.S., must first obtain special approval to export high-tech interception devices.”

According to the Wall Street Journal: “Tech firms from the U.S., Canada, Europe, China and elsewhere have, in the pursuit of profits, helped regimes block websites, intercept emails and eavesdrop on conversations.”