August 5, 2011 by The Bureau
Published in: Uncategorized
Tweet
Email this 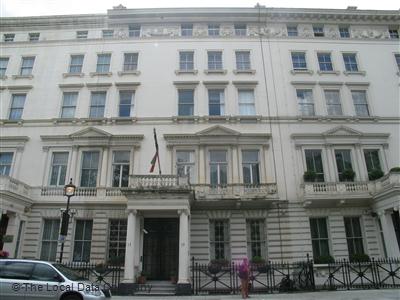 The Ethiopian Embassy in London

On Thursday a joint investigation by Newsnight and the Bureau was broadcast on the BBC. The film exposed human rights abuses and the withholding of aid for political means within Ethiopia.

The Ethiopian Embassy in the UK has now issued a press statement rejecting the allegations made. The Deputy Ethiopian Ambassador to the UK  Abdirashid Dulane was interviewed on the programme.

The Embassy has also asked for further opportunity to put forward its side of the argument.

Here is a copy of the statement:

Last night, 4th August, BBC Newsnight broadcast a 17-minute film making allegations of human rights abuses against the Ethiopian government. The timing of this report is guaranteed to inflict maximum damage on those who are suffering from the worst drought for sixty years in our region. It was difficult to respond to allegations in the few minutes given to our Deputy Head of Mission, Ambassador Abdirashid Dulane, after the film was aired, when we had not been permitted to see the film in advance. We are issuing this statement to put the record straight.

The most serious allegations in the film, which the government utterly refutes, were voiced by the Ogaden National Liberation Front (ONLF) and the Oromo Liberation Front (OLF). Ethiopia’s parliament has designated the ONLF and OLF as terrorist groups. The two groups are affiliated to Al Shabab and Al Qaeda. None of this was mentioned in the film.

The Ethiopian government refutes absolutely the allegation that there is a policy or practice of extra-judicial killings, arbitrary arrest and routine torture by the police, prison officers and other members of the security services and the military.

The ONLF admitted to killing 74 Ethiopian citizens and Chinese workers at the Abole oil installation in April 2007. Its UK spokesman openly boasted about this on Al Jazeera Television’s English and Arabic services the following day. Despite assurances from the Newsnight producer, these facts were not included in the Newsnight film. The vast majority of the people of the region do not support the ONLF because it has a well-known policy of destroying development infrastructure and attacking communities that do not support it. The voices of this majority were not heard.

Newsnight repeatedly claimed that their film was made ‘clandestinely’ as the film-makers would ‘not have been allowed to film in Ethiopia’ if they had applied for visas. But dozens of film crews visit Ethiopia every month. The BBC’s own correspondent Mike Wooldridge was in Ethiopia three weeks ago for a week covering the drought in the Ogaden region itself and was issued a visa instantly. Newsnight were made aware of this but, again, chose not to tell its viewers.

It is regrettable that the BBC failed to consider the context – the wide array of rights that the majority of Ethiopian people now have to education, healthcare, clean water, increased agricultural output, which the British government and people have generously supported and continue to support, and micro-credit schemes to start up small and medium sized businesses, to mention but a few.

Ethiopia has an independent judiciary that is respected throughout the African continent and beyond. Defendants are treated in accordance with the law and due process is observed. Ethiopian prisons undergo regular inspections by independent bodies.

The Ethiopian government refutes absolutely the allegation that there is a policy or practice of extra-judicial killings, arbitrary arrest and routine torture by the police, prison officers and other members of the security services and the military. The Ethiopian National Defence Force (ENDF) fully understands the importance of serving the cause of the people. It has won the hearts and minds of people in the Ogaden region as it always ensures that its actions against spoilers in the region do not in any way disrupt the peaceful lives of the people of the region. The army’s professional integrity and discipline is not limited to its activities within Ethiopia. This has also been repeatedly demonstrated in the numerous peace-keeping operations in which it has taken part, in various part of the continent. It is unheard of for countries to agree to the deployment of an entire brigade from a neighbouring country in a peacekeeping mission, but the reputation of the ENDF is such that both South and North Sudan have unequivocally agreed to its recent deployment.

The Ethiopian police and other security services are equally well trained and disciplined and there is no evidence, apart from the noisy allegations of the ONLF and some international NGOs of questionable motives, to suggest that torture and other inhumane treatment are systematically used to extract confessions.

Newsnight’s claim that aid is being denied to supporters of the opposition has been strongly refuted, not just by the Ethiopian government but by the Donors’ Assistance Group (DAG), a consortium of 26 donor governments and international organizations such as the World Bank, based in Addis Ababa, after it had made thorough investigations.

Ethiopia has an independent judiciary that is respected throughout the African continent and beyond. Defendants are treated in accordance with the law and due process is observed. Ethiopian prisons undergo regular inspections by independent bodies. The ICRC gives regular training to prison staff and prisons have become rehabilitation centres so that those serving time can learn skills thus easily reintegrate into society.

The BBC’s Addis Ababa correspondents have largely made an effort to come up with well-informed, balanced and fair coverage. We feel that on this occasion the BBC has abandoned all attempt at fairness and produced a polemical and deeply damaging film that does not reflect the lives of Ethiopia’s 82 million people, but relies on the testimony only of those who are engaged in terrorism in the region and of a few Diaspora-based rejectionist politicians. We reiterate our views that last night’s programme presented an unbalanced story about the Horn of Africa drought crisis, using it as a pretext to make allegations based on unsubstantiated facts. We urge BBC Newsnight to offer the Ethiopian people a right to reply worthy of the name and look forward to its response.