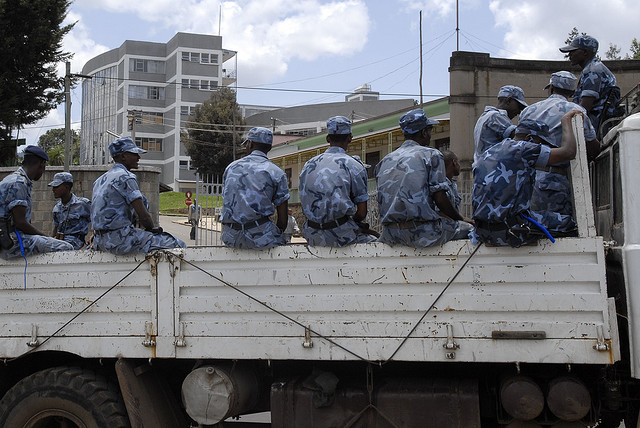 Widespread violence and intimidation of the opposition by Ethiopian government forces was reported to top EU officials following the 2005 elections.

The crackdown is detailed in 61 emails sent by the EU Ambassador to Ethiopia at the time, Timothy Clarke, and leaked to the Bureau.

The dispatches described growing concerns about reports of murder and arrests of thousands of civilians by government forces.  And these missives were read at the very top.  We know they were sent back on a day-by-day basis to 27 top officials in the highest offices of the European Union.

June 6 2005
Many truck loads of students were taken away during the morning. Destination unknown. Violent incidents are already popping up all over Addis.
Ambassador Timothy Clarke

The emails describe the persistent persecution of the political opposition and of military forces removing children from schools and raiding universities.  They also catalogue the arrests of over 3,500 people, all detained without charge.

Crackdown in Addis
The crackdown began in the weeks after the election. Then the ruling party realised it had not gained as many seats as it had expected to and had actually lost the election in Addis Ababa to the opposition party, Coalition for Unity and Democracy (CUD).

As a result, no official results were announced for weeks after the votes were cast and in some areas, where the opposition had won a majority, re-elections were held. 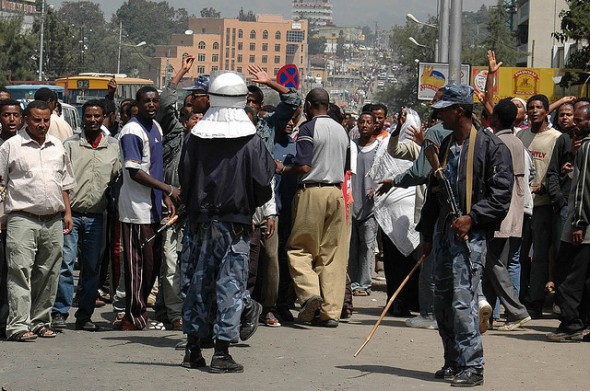 But there was a massive crackdown on the opposition reported on June 6 2005 by Clarke. ‘Many truck loads of students were taken away during the morning. Destination unknown’.

This was immediately followed with another report the next day:

June 7 2005
Violent incidents are already popping up all over Addis. The Austrian ambassador just called me to say that she has been witnessing the army moving into a high school and removing children. There have been violent scenes around one of the squares.
Ambassador Timothy Clarke

One of the officials in receipt of the emails was Rodger Moore, who, until June, was the EU’s head of External Relations for Central and East Africa.

One disclosure shows how government security forces were posted at hospitals and forced families of the dead to sign agreements stating that the victims were criminals. They operated what was known as a ‘no signature, no body’ policy and it was only when the agreements were signed could families reclaim the bodies of their relatives.

June 12 2005
Basic human rights abuses are being committed by the government on a daily basis – the EU must respond firmly and resolutely.
Ambassador Timothy Clarke

Yet despite these reports, the next day the EU presidency commended the joint Ethiopian declaration on the elections.  This despite being in full knowledge of the human rights abuses occurring on the ground.

Election complaints
The horrific events in Addis Ababa occurred amidst hundreds of complaints about the elections, which the Ambassador described as an ‘indictment’ of the process.

Following weeks of violence, Clarke reported back to the EU regarding a conversation he had with opposition members about their supporters in detention.

July 1 2005
They have very real concerns about the detainees. They are also very worried that even if their people are subpoenaed, they will be tortured if and when they return to detention.
Ambassador Timothy Clarke

A number of exchanges also show how Zenawi monitored the phone calls of the opposition.  It was also reported how the Ethiopian prime minister arranged for additional riot police material to be airlifted into the country.

But as the Ethiopian government ordered extra riot gear, the international community continued to give additional assistance to the country.  On July 26 a further €8.5m in humanitarian assistance to avoid famine was handed out.

*NOTE – To read the emails you can download the original on bottom right of the document.

The red passages indicate the information has been redacted.