May 23, 2011 by Angus Stickler
Published in: Iraq War Logs
Tweet
Email this

At least 122,000 civilians were killed during the US-led occupation of Iraq, 15,000 more than previously thought. The civilian toll accounts for 80 per cent of all deaths in the Iraq conflict.

The numbers of dead were recorded by coalition troops throughout the conflict. The leaked documents provide the first view of these numbers.

Iraq Body Count (IBC), a London-based group has been analysing the numbers for the past two months, comparing them to an extensive database of civilian deaths in the war it had built up from media reports and other public records.

From IBC’s analysis the US files identify more than 15,000 civilian deaths that never appeared in media reports or public records. This new information pushes the total number of fatalities in the war, including combatants, to more than 150,000. 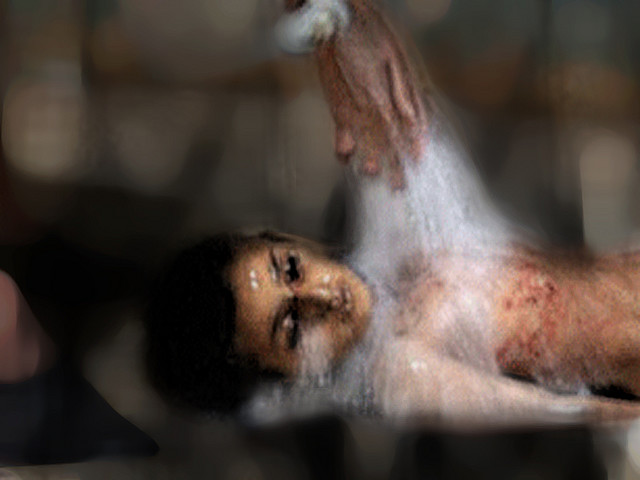 A child at the morgue – Matthewgood/Flickr

There are 52,000 war logs that record deaths in Iraq – this includes civilian and coalition casualties, as well as those classed as “enemy kills”. IBC intends to complete a thorough analysis of every file, a process that could take several years.

Related article: Hundreds of civilians gunned down at checkpoints

Already IBC has uncovered thousands of deaths that were never known about. In some, scores of Iraqi civilians were killed in a single incident.

For example, a log taken on October 27 2005 records the deaths of 25 civilians and two Iraqi police officers killed in a tribal attack in the northern province of Diyala, Iraq:

In another, previously unknown incident on December 19 2004 in Ninewah province, US forces discover 12 murdered civilians:

December 19 2004
At 0820C, 1-24IN reported that a walk in source informed them about 5X dead bodies in a cemetary at [redacted] in Mosul… also discovered 7X more dead bodies at the intersection of RTE [redacted] and [redacted] enroute to retrieve the previous bodies.

In a third example, on January 16 2007, Iraqi police found the bodies of 20 civilians in a mini-van in Baghdad. They had all been murdered.

Following the release of the US military war logs, the civilian death toll has risen from 107,000 to 122,000, according to Iraq Body Count.

But it is the smaller cases, where one or two people die, that have so inflated the estimates, says John Sloboda, director of IBC:

“These cases are the ones that tend to get less attention from the press and media – many just don’t get reported,” he told the Bureau.

The war logs supply more than just casualty figures. Many give details of how, when and why civilians died. Some even provide names of the killed and wounded.

On the evening of November 29 2006, Iraqi soldiers made a gruesome discovery near the city of Baquba, in Diyala province.

The following day, a Reuters report said: “Iraqi soldiers have found 28 bodies in a mass grave near the volatile city of Baquba, the US military said in a statement on Thursday. The statement gave no details of how they had died, whether they were all men or included women and children.”

Related article: US troops fail to record civilian deaths in one of Iraq’s bloodiest battles

The US military file sheds more light on the event, listing the names of the deceased, one by one. This information will be used by IBC to bolster the Reuters report, giving vital details to the families of the deceased.

The US files record just over 66,000 civilian deaths. This falls well below IBC’s total figure. The discrepancy appears because of under-reporting in the US files, particularly when logging civilian casualties in air strikes.

On September 9 2009, US forces launched an air assault on Tal Afar, a suspected haven for foreign fighters. The US military report is short and to the point: 102 enemies killed in action. There is no mention of civilian casualties.

In a press statement, the US military described the bombardment as “precise and accurate fire”. But contemporaneous media reports show that the civilian toll was severe:

“There is bombing everywhere and my cousin was killed by a rocket when he was trying to get his family out of the city,’ said Bashir Abboosh, a 41-year-old sheep farmer. For long periods, witnesses said, the fighting prevented ambulances from collecting the wounded and the dead. The director of the Tal Afar hospital, Dr Fawzi Ahmed, said that his hospital had seen 45 dead and more than 80 wounded, most of them civilians.” New York Times, September 10 2009.

The human cost of war

Sloboda believes the release of the documents is vital to the public interest.

“There will be thousands of names in these files which will help families trace their missing loved ones. There are no memorials listing all the names of civilians killed in the course of this conflict – our ultimate aim is to help achieve this,” he says.

Al Jazeera traces the families of civilians killed by a US helicopter in Iraq.

A report in the Mail on Sunday reveals potential war crimes and torture by British troops.

Iraqi families tell of the struggle to find their loved ones.