July 6, 2010 by The Bureau
Published in: Uncategorized
Tweet
Email this

Javad Moghimi in effect ended his career in his own country at the age of 23 after taking a photograph of a defiant green clad woman in front of Azadi Tower in central Tehran.

The picture came to symbolise resistance to the Ahmadinejad regime and appeared on the cover of Time almost exactly a year ago. Moghimi fled Iran shortly afterwards. He now lives on a dusty back street in a small town in Turkey, where he has been granted asylum status.

Recounting those events to the Guardian as part of a Guardian Films and Bureau of Investigative Journalism investigation last month, Moghimi says many of his friends and former colleagues have been arrested and in some cases tortured. 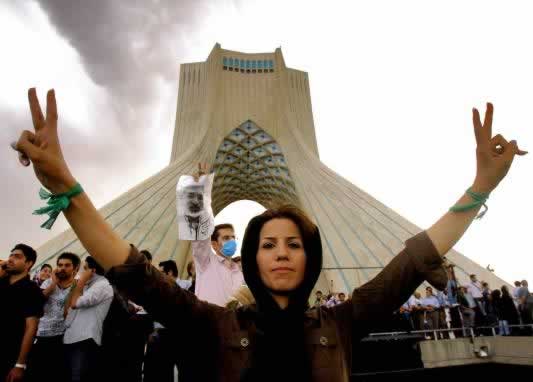 Reporters Sans Frontieres (RSF), also known as Reporters Without Borders, a non-governmental organisation defending journalists, estimates that about 3,000 media workers in Iran are out of work after the post-2009 election crackdown by the regime.

Many editors are now afraid to hire anyone who has worked for the dozens of pro-reform publications that have now been shut.

Last month, the organisation began to receive information that journalists were being summoned by the Iranian intelligence ministry to promise, in writing, that they would not participate in or cover protest during the anniversary of Mahmoud Ahmadinejad’s re-election.

The Committee for the Protection of Journalists ranks Iran as the world’s No 1 jailer of journalists, with 170 journalists and bloggers arrested in the past year while 37 remain in prison. RSF estimates at least 100 journalists have been forced to flee since last June.

At the time of the Iranian election, Moghimi was working for the Revolutionary Guard-run press agency, Fars News. He was assigned to follow President Ahmadinejad on the campaign trail, and it was made clear to him that he could only cover the election result. As the protesters took to the streets, he was stunned to be ordered to stay at home by his bosses.

“They told us we can’t go out and take photographs. They did not issue us with permits…They said that we are not going to be responsible if anything happens to you, we will not back you up and we will even testify against you and claim you are spies.”

Despite these warnings, Moghimi went out and took photos of protests that became known as the green movement. “When my photos were published I was delighted for a few moments.” But his euphoria was short-lived. “I was frightened and was wondering: ‘What will the future hold for me?’ because of these photos.”

Moghimi describes how the managing director summoned all the staff to a meeting, announcing that they knew that two photographers from Fars News had taken photos and sold them abroad, and that the culprits would be dealt with severely.

With the pressure mounting, he decided to flee a few weeks later.

Since the June elections and following the demonstrations in December after the holiday of Ashura, two of his colleagues have been arrested, Moghimi says.

His immediate boss, Majid Saidi, is on bail awaiting trail, charged with activities against national security and taking photographs of protesters. He says his close friend Masoud Lavasani, a political correspondent for Fars News, is in prison on hunger strike.

“He is going through hell,” says Moghimi. “When I hear his news I get very upset and I get a lump in my throat, because…I don’t know what the future holds for news reporters and my friends in Iran.

“Their crime was to take photographs of the protesters and the demonstrations. If the Islamic Republic of Iran is able to arrest a photojournalist charged with activities against national security or taking photographs of the protesters, it is a joke to say we have freedom of speech, because there is no freedom as long as they arrest people for the crime of taking photos of demonstrations.”

He has been in contact with some of his former colleagues via the internet, and what he has learned is disturbing. He has heard stories of torture, beatings, even one case of rape.

Tina Carr, of The Rory Peck Trust, which provides grants to injured or imprisoned journalists, says: “It’s incredible how tight the crackdown is on the media in Iran…It’s difficult for us to even make contact to provide assistance because media workers are in danger just from talking to us.”

Moghimi is still coming to terms with the restrictions on press freedom in his county: “I don’t want to see that our young men and women are murdered or executed or to be imprisoned. I want to see the freedom that we want and deserve in Iran, so that we can return to our homeland…[I want] a photographer like me to be able to work freely so that they don’t have to resort to living in America or Europe in order to pursue their media work.”

By Angus Stickler, the Bureau of Investigative Journalism, and Chavala Madlena, Guardian Films