July 6, 2010 by Caelainn Barr
Published in: Uncategorized
Tweet
Email this 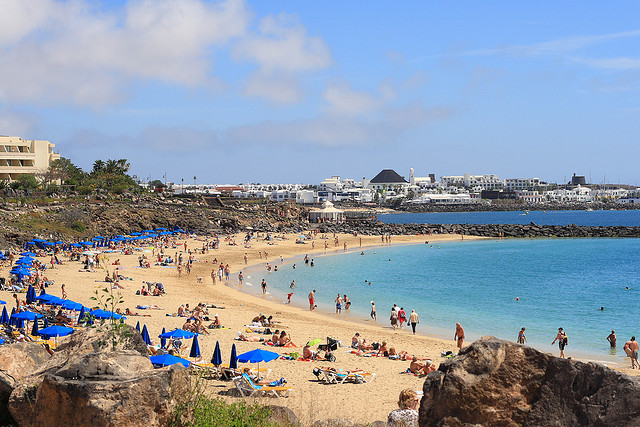 As befits the name, the Princesa Yaiza Suite Hotel cuts a regal figure amongst the tourism infrastructure of Lanzarote, the fourth largest of the Canary Island archipelago.

In Playa Blanca, among the most heavily exploited coastal strips of Lanzarote, the hotel is a reference for quality among business conference delegates and celebrities alike. Guests, paying upwards of €150 a night, step out of the 34,000 sq m complex onto a golden beach, can splash about in two enormous pools, dine at its six restaurants, and explore a mini theme park for kids.

The luxurious surroundings are there in part thanks to the generosity of EU taxpayers.

The hotel is one of eight in Lanzarote whose construction was partly financed by European Union development funds, a joint investigation into the EU’s aid flows by the Financial Times and the Bureau has found.

All told, €23.6m in EU funds has gone directly into the hotels in question on Lanzarote, whose remote geography and overdependence on one industry – tourism – makes it eligible for a range of European and national subsidies and tax breaks. The Princesa Yaiza was one of the leading recipients, receiving more than €4m.

For all its prestige, the Princesa Yaiza also contravenes local planning laws. Like many other hotels on the island local courts have declared it an illegal structure.

In total, 24 hotels in Lanzarote have been the subject of cases brought by the island’s own governing council, known as the Cabildo, or other interested parties. Twenty-two, including the Princesa Yaiza, have had their initial building licences retroactively annulled by the Canary Islands High Court, although the Princesa Yaiza says it still retains other operating licenses.

The hotel denies any wrongdoing and claims it has been caught up in a local political dispute. “It’s not my responsibility if [local authorities] gave the licence and now want to take it away. This is a political topic, which the politicians intend to resolve shortly,” said Javier Suarez, director of Princesa Yaiza Hotel.

The global economic downturn has hit Lanzarote’s tourism and construction sectors hard and it has among the highest unemployment levels in Spain, at 31.5 per cent compared with a national average of 20 per cent.

But for a growing band of conservationists and anti-corruption campaigners, the EU funding for the hotels has become a lightning rod.

They argue the money would have been better used on economic diversification, green energy projects, or improved educational and training facilities. And that the rapid growth of the tourism industry has crowded out traditional agriculture and fishing from the local economy and undermined the sustainability of an island that imports everything and relies on desalination plants for virtually all its water.

For their part, EU officials have watched with horror as member states’ money has been caught up in corruption cases stemming from illegal construction of hotels and other development projects.

The Princesa Yaiza has not been caught up in any corruption investigations. But in Lanzarote alone, more than 30 public officials and businessmen have been arrested amid investigations into bribes for building and operating permits, and similar offences. At one stage, six of the seven island mayors were caught up in police inquiries.

Alarmed by the unfolding drama, the European Anti-Fraud Office opened a file on Lanzarote and is now charged with ensuring the recovery of any EU money used to finance illegal construction of the hotels.
Seven of the eight hotels that received EU funds have been declared illegal by local courts.

Officials in Brussels say the EU has so far managed to recuperate €19m of the €22.5m disbursed to those seven hotels by withholding other funds due to Spain as part of the current funding round. However there has been some dispute about who is ultimately repaying the EU.

While Spanish authorities are adamant that not one euro has gone to any of the hotels, some hotel owners caught up in the dispute claim that they received the funding and have never been asked to pay it back, raising questions about the efficiency of financial control systems in Spain.
The case of the Lanzarote hotels is emblematic of the potential pitfalls of EU funding because of the environmental sensitivity of the island.

Conscious of Lanzarote’s delicate state, the local government in 1991 published what was considered at the time the most progressive land use plan in Spain, a country which had already surrendered its coasts to low-rent mass tourism and unfettered residential development.

UNESCO awarded it Biosphere status in 1993, reinforcing perceptions of a protected environment. However, changes in island and regional government, lax municipal governance, and the ready availability of bank credit and public funds fuelled a construction boom of such force in the 1990s that the island government was forced to call a near-moratorium on new building in 2000.

By Caelainn Barr, the Bureau of Investigative Journalism, and Mark Mulligan, the Financial Times